Shahsavan kilims are the geometric patterned flatweaves woven by the Shahsavan tribes, a large nomadic pastoralist group residing in Northeastern Persia. This mountainous area, or Transcaucasus, was home to a variety of smaller tribes of different backgrounds, but were loosely united in the 17th century under Shah Abbas dynasty(1587-1629). The diverse weaving traditions brought from Turkish, Persian, and Armenian peoples coalesced into an impressive new rug grouping.The design work characterizing Shahsavan weavings is highly geometric and replete with an array of vibrant natural dyes. Often, rectilinear medallions are aligned horizontally or vertically across the field, with smaller improvised motifs adorning the background.  shahsavan kilims may be distinguished with stepped or latch hook medallions, the Turkish Memling guls, the ubiquitous boteh pattern, or small animal figures. Shahsavan kilims are Of great interest to colletors around the world. There are the striking similarities between shahsavan kilims and other flatweaves from Iran. However, Shahsavan weavings rarely adhere to a specific design style.

Be the first to review “Shahsavan kilim” Cancel reply 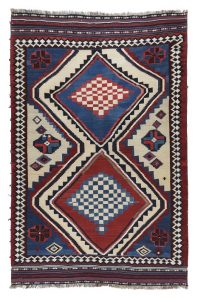