The Afshari are one of the great autonomous peoples of Persia whose ancestors from the north of the country were resettled between Shiraz, Kerman and Yazd. Historians are not in complete agreement as to the date of the deportation and the reason for it. Their place of origin is also a source of controversy (opinions include the Caucasus, Azerbaijan and the east Anatolian region of Kars) but it is established that they arrived in their present area of settlement via Mesopotamia in the 17th century. The Afshari speak a Turkish dialect and their carpets are similar in character and style and colour to Caucasian pieces. Nomads; semi-nomads and settled people weave traditional, ethnologically interesting, nomad pieces in harmonious colours in their homes, simple tents or clay hunts… the pronounced fine colour sense of the Afshari consistently results in harmonious well balanced colours, generally woven on a dark ground in dark red, red-brown and a reddish dark blue. White, ivory and yellow are sparingly used for contrast and outline; orange and green were introduced more recently. Natural dyes predominate. usually geometric shapes including rhomboids, hexagons and octagons . Strongly stylised rosettes, geometric blossoms and tendrils and animal figures can be seen. Persian ornaments, including botehs, also appear sometimes in endless repeat patterns. The simple borders are of various widths and mainly carry geometric designs. warps and wefts are made of cotton,. Old and antique Afshar pieces are collected

Be the first to review “Afshar rug” Cancel reply 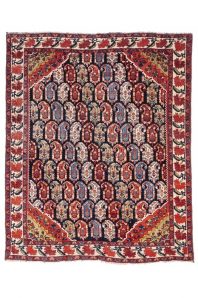 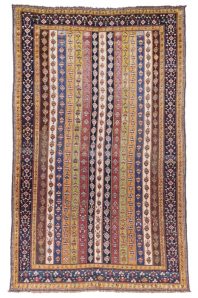 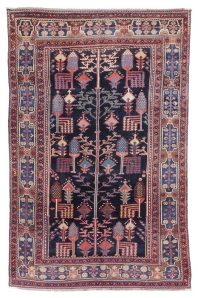 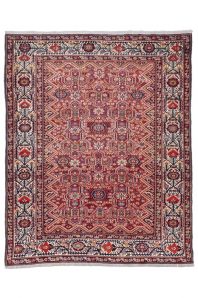